Weatherproof LTE surveillance camera with SIM card, which transmits reliable videos over the cellular networks without a network or WiFi!

Live videos on your smartphone at any time

Affordable click access to cameras worldwide via smartphone or PC, with a free of charge APP "CamHi". With the LTE surveillance camera, the videos can be transmitted directly via the 3G, 4G, UMTS and LTE mobile networks without an additional router. After an invitation and security-relevant settings, up to 4 users can access the camera at the same time. The settings also allow photos to be uploaded to an FTP server; this can be time-controlled or alarm controlled. 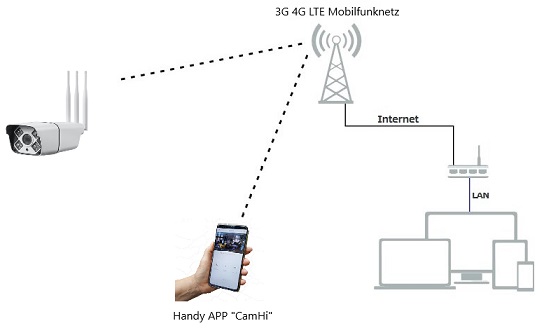 The APP Camhi can be downloaded free of charge from the Playstore for Android and from the Apple Store for iOS. You will find the operating instructions in German in the documentation. With the Camhi Windows software it is possible to access from your home PC.

In addition, it is possible to record a construction progress video at construction sites, for example, which shows a specific time lapse in time. For this purpose, individual images are uploaded to an FTP server at certain intervals, which, when strung together, result in a video clip. Here, 3 - 5 minute clips have proven their worth, which are recorded over a period of, for example, 6 months with 8 pictures distributed over the day.

High quality camera with LTE with IR (night vision) LED lighting, bright videos even in total darkness! The range is about 30 - 40 meters. 4 power LEDs provide a fairly homogeneous night view of the scene. For the human eye, the IR frequencies can only be seen as a reddish glow, for the camera sensor, however, the scene is bright as day. Since this IR frequency is in the invisible range above the IR spectrum, the images are not colored, but black and white. Night vision is particularly useful in applications where white light is not possible. 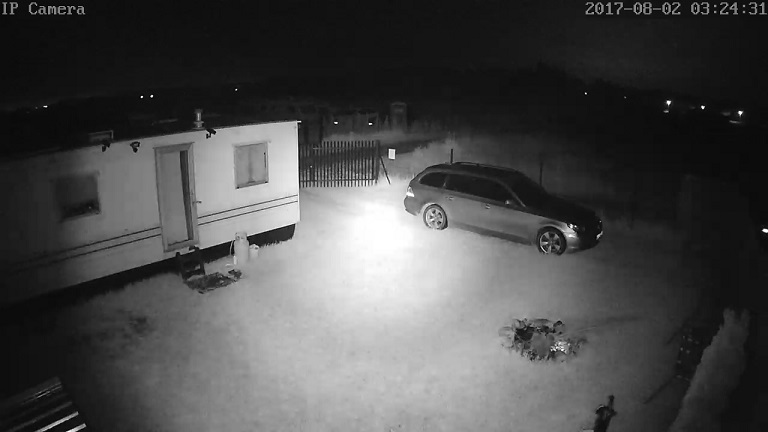 Local recording without a recorder

With the integrated SD card holder, SD cards up to 128GB can be used. Ideal for recording alarm images and video sequences. The LTE surveillance camera has a timer function, according to which the recording on the SD card can be designed. Motion detections and temporary recordings can be stored perfectly. With the APP you also have access to these recordings. We do not recommend continuous recording on an SD card (24/7) as SD cards are not designed for this purpose. A failure after months is possible here. Please pay attention to the description of which space is intended for SD card and SIM card.

The camera with LTE has a lens with a focal length of 6mm: the horizontal viewing angle is 60 °. This focal length is particularly suitable when objects should still be easy to identify. Smaller focal lengths, i.e. larger viewing angles, on the other hand, make the objects appear smaller. If you have to cover a larger angle, the LTE camera with 2.8mm is ideal: Here you can monitor an angle of more than 90 °. Very suitable for halls with a rectangular format.

Up to 4 freely selectable fields can be set, which darken the picture if private areas are not to be captured by the LTE surveillance camera. These image sections are then only displayed in dark. When installing an LTE surveillance camera, it can lead to discussions among those involved if private areas can be seen on the camera image. So you can define the areas in advance and exclude them from monitoring.

Push message to the cellphone after motion is detected

A very interesting function is the motion detection: The camera is set so that an alarm is only triggered if motion is detected in front of the camera, which appears on the APP as a push alarm on the smartphone or tablet and also a video recording on the SD Card triggers. So you will not miss any activities during your absence. To prevent false alarms, up to 4 fields can be defined that are suitable for motion detection. For example, trees, bushes or passing vehicles can be excluded from the detection of the movement. You can also send an e-mail to a previously entered address.

If neither network / WLAN Internet nor power supply are available

Here, the power supply via a connected solar system is ideal. However, an uninterrupted supply requires at least a 100 watt panel and a charging battery of at least 30 - 40 amps. If the monitoring also takes place in winter (from November to February), the system must be dimensioned somewhat larger. You can get a good system (100 watt panel, 40A charging battery, charge controller, cable set) for around 400 €. To calculate the necessary battery power, the power consumption of the cameras is about 5 - 8 watts.


Additional setting options such as backlight compensation, WDR, color intensity, brightness or noise reduction are integrated. Instructions in German, including the setting and configuration of the built-in router, can be found below.

The micro SD card and the SIM card are not included.

TIP: Before buying an LTE surveillance camera with a SIM card, make sure of the reception situation on site. The LTE reception should be sufficient, which can be checked very easily with the smartphone.

More LTE surveillance cameras can be found in our CCTV cameras with SIM card. You will also find 4G router for access to standard IP cameras.

In our FAQ you will find many answers to the important questions about data consumption and operation of the 4G LTE CCTV camera.

We look forward to your inquiry!