Create additional lighting in the IR range with external infrared spotlight for a perfect result!

IR LEDs are nowadays integrated with almost all IP cameras and surveillance cameras. Their range is depending on the version between 5 and 40 meters. The information provided by the manufacturer should not necessarily be trusted blindly, since our tests indicate that their reach was often one-third higher than our experience. We have adjusted our datasheets accordingly and reduced the range information. 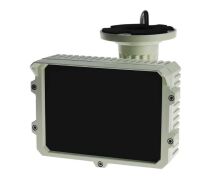 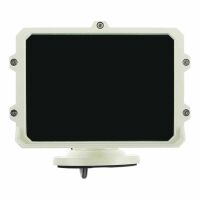 Why do I need an infrared illuminator?

There are installation locations that can not be covered with the integrated IR LEDs of the surveillance cameras. Especially with property monitoring or access roads, the performance of the built-in IR LED's is not enough, and it must be used with additional IR headlamps.Another reason is the predilection of insects at the source of illumination. Although the IR spectrum is perceived only as red glow to the human eye, it attracts insects in the summer. The effect is a swarm of insects, which is directly in front of the camera lens and thus affects the view of the surveillance camera. As the visibility at night is generally already limited, this may lead to limitations in the evaluation. Especially when using a motion detection, this can lead to false alarms.The only effective way to prevent this is to use external infrared LED illuminator, which are typically placed about 1 meter from the camera.
In professional outdoor applications, external IR spotlight are often used.

Which infrared spotlights are available?

Apart from the design, there are differences in performance and in the radiated IR spectrum. The power depends exclusively on the distance, which must be illuminated with IR. Where smaller distances are often covered by the built-in IR LEDs, an IR floodlight with at least 15 watts is required for larger distances (50 - 150 meters). Distances of 200 meters require at least 25 watts. If distances of 300 meters are illuminated, the required power is 50 watts and more. PTZ IP cameras, Speed Domes, PTZ cameras may need 100 watts, depending on the zoom factor, if the distance is 500 meters. This happens very rarely and only with professional large plants.Infrared lights are available in 2 frequency spectrums. The most common frequency is 850nm (nanometers), where a red glow can be seen. This glow is not annoying, but it is noticeable in the dark.
If it is important that in the dark, nothing should be visible from the IR headlights, there is only the possibility to use the 940nm frequency. This IR illuminator is often used for military purposes, but is by far not as common as the 850nm version.

What should I look for when buying an IR illuminator?

Since the IR illuminator is mostly used outdoors, it should be at least IP65 / IP66 rated. All connections should be waterproof and weatherproof. So that the infrared LED illuminator is not supplied with power for 24 hours, built-in light sensors (photocell) are necessary to switch off the spotlight in daylight and only switch it on again when darkness falls. Similarly, the power of the IR must correspond to the desired distance, for example 20 watts at 40 meters. An important feature is the beam angle of the IR spot. At 60 ° illumination angle, although I have a wide illumination, but the range is lower. With a lower beam angle I increase the range:

- Designed for outdoor use, so waterproof and weatherproof

- built-in photocells for night operation and shutdown during the day

- matching power in watts, according to the desired range

- Beam angle of the IR spotlight, standard is 60°

We are happy to assist you in planning your IR video surveillance, call us or send us a contact form.