The security camera IP by Hilook is suitable for all indoor and outdoor applications, with POE supply, built-in IR night vision LEDs and large surveillance area!

With triple stream, alarm settings, backlight compensation, WDR technology for a homogeneous image and a large, horizontal viewing angle of 100 °, the IP B140H surveillance camera is a very cost-effective and powerful component of your system.

The surveillance camera IP B140H is equipped with the POE technology. There is no need for a power outlet near the camera, as the power supply to the camera is transmitted along with the video data via the network cable. Thus, only one cable from the camera to the recorder or router / switch is necessary.

This requires that a so-called POE switch is used, which is used between the camera and the router. Today's NVR recorders for surveillance cameras already have built-in POE switches.

The IP Surveillance Camera detects any movement in the surveillance area and, if desired, sends a push message to your smartphone or starts recording on a recorder. The zones of motion detection and also the sensitivity can be adjusted.

With a calendar function, the times in which the motion detection should be active can be entered.

Good view even at night

The built-in high-performance night vision LEDs can cover areas up to 30 meters. At nightfall, the IR LEDs turn on automatically. Since the IR spectrum is above our field of view and above the color spectrum, the video recordings are taken at night in black and white.

If you want color shots at night, additional white light emitters are necessary. 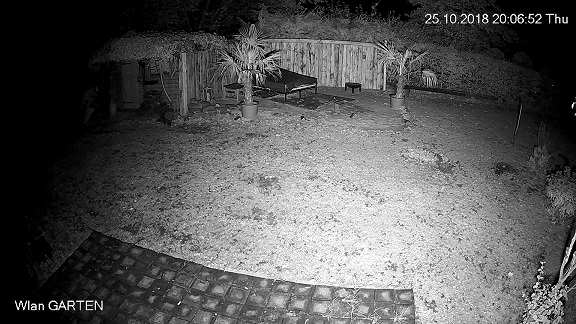 The 4MP chip of the Hilook B140H offers many details and a sharp image of all objects, with a resolution of 2,560 x 1,440 pixels and up to 20 frames per second. So even fast moving objects can be clearly recorded. The H.265 + compression ensures a low load on the hard disk capacity and saves storage space.

All live videos on your smartphone

With the P2P technology, it is now possible to set up the camera in a few minutes and access the camera at any time via the Hikvision APP HIK-Connect, no matter where you are. The app can be downloaded for free from the Apple Store for iOS devices and from the Playstore for all Andriod devices.

You will also receive alerts from the camera for quick response. Remote access to the IP surveillance camera also works via a PC.

Matching recorders are available in our NVR Recorder category.